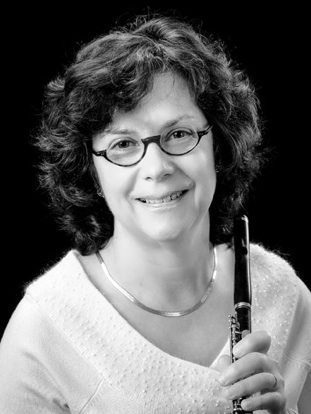 This month we talk to Ms. Dombourian-Eby known to everyone as Zart

She received her B.A. and M.M. degrees from Louisiana State University. After a year of study in Houston with Albert Tipton, she attended Northwestern University, where she earned a Doctor of Music degree under the tutelage of Walfrid Kujala, and also coached with Donald Peck. Her doctoral paper, The Piccolo in the Nineteenth Century, represents the only extensive research ever undertaken on the piccolo in that era. Perhaps this was the reason which gave her the inspiration for commissioning new pieces for Piccolo. However, in her own words she puts is down to “when I was asked to perform at the NFA 25-th anniversary convention in Chicago in 1997, I could not find anything to play! And I ask Martin Amlin to write me a piece (now known as the ‘Big Amlin,’ as opposed to the ‘Little Amlin’, the Sonatina Piccolo)”. (Martin Amlin is Chairman of the Department of Composition and Theory at Boston University and Director of the Young Artists Composition Program at the Boston University Tanglewood Institute).

Zart has also served twice on the National Flute Association’s Board of Directors, and has been a featured soloist and teacher at numerous NFA conventions.
She was the recipient of an Artists Trust Award in 2001, which led to further commissions and she has her favourites: “I really love the Levente Gyongyosi Sonata that I commissioned! There are so many great pieces for us now, as opposed to 1997! I enjoy all of Ken Benshoof’s pieces, Dorff’s Sonatine de Giverny, Liebermann’s Concerto and many of Gary Schocker’s pieces”
Her solo CD, in shadow, light, is available on Crystal Records. She only recorded the works by Amlin, however, she hopes to do more soon.

In Shadow, Light
Some of this sort of music is incredibly technically challenging and Zart finds it incredibly invigorating coming from an orchestral background. “I think that the two types of playing help each other! I find it incredibly invigorating to work out new solo pieces- they keep my brain, fingers, and  ambouchure all in good shape. Of course, it’s great for my orchestra playing, where we are often playing repertoire we are played many times before. The solo pieces keep things fresh, for sure!
Since we have a new music director Ludovic Morlot, we are playing quite a bit of repertoire that is new to us. Morlot’s last two seasons was marked with further critical success, including sell-out performance of Stravinsky’s The Rite of Spring, Berliooz,s the Damnation of Faust, Hols’s the Planets, Britten’s War Requiem, Rachmaninov’s Piano Concertos, Messiaen’s Turangalila.”
Zart is the Principal piccolo for Seattle Symphony, where she’s been since 1982. The Seatle Symphony has held a unique place in the world of symphonic music. It performes over 200 performances annually, made more then 140 recording and garnered 12 Grammy and 2 Emmy Awards.
Apart from the Piccolo playing and commissioning new repertoire for the instrument, Zart was the founding editor or Flute Talk. A flute magazine which has something for every serious flutist – from high school and college students to teachers, professionals, and adult amateurs. She is also on the editorial board for the Flutist Quarterly. For four decades, The Flutist Quarterly has provided NFA members information about and insights into the performance, study, history, manufacture, and enjoyment of flutes, flutists, and flute music. Published four times per year, it features articles written by leading flute performers, scholars, and teachers and news about developments and accomplishments in the NFA membership as well as the flute community at large. The FQ Plus is the online sister of Flutist Quaterly which has additional FQ articles; books offering graded teacher guides, bibliographies, and anthologies of essays by leading pedagogues; books written and about leading flutists and teachers; CDs of historical recordings by renowned flutists; the annual convention program book, and more.
As always we were interested in what Zart looks for in players who come in and play with her orchestra and what is expected of them. She says that  “we look for team players, people who are able and willing to ‘fit in’ with the section, as far as style, sound, intonation, interpretation. Also, having experience playing in orchestras, knowing the repertoire is really important as well. And people who are nice.
A principal player needs to be bold, expressive, creative. A section player needs to be able and willing to curb their own artistic tendencies in order to enhance and align with the principal”.
A great player like Zart requires a great instrument and she has recently purchased a Keefe piccolo which she absolutely loves. Keefe picolos are notorious for their sonorous sound, ease of articulation and wonderful intonation. We would recommend them to any flautist looking for a versatile intrument.

Zart adds “I think it is very important for flutists to be able to play the piccolo well, in addition to the flute – it makes you so much more employable. Plus, it is fun!”